This three-night, four-day wildlife safari tour includes a variety of activities inside Chitwan National Park. You can enjoy a canoe ride down the Rapti River and then go on a jungle walking safari. You can also go on a jungle safari, observe birds, and take part in Ethical Elephant activities. Also, spend the night in a jungle tower or with an indigenous tribe in the region. This package includes everything that you should do during your stay in Chitwan.

END_OF_DOCUMENT_TOKEN_TO_BE_REPLACED

The park is also home to 68 species of mammals including the Royal Bengal Tiger and greater one-horned rhinos. Similarly is housed 55 species of amphibians and reptiles. Likewise, around 546 species of resident and migratory birds are found in the forests, riversides, and lakesides around the park. Between September and November, and February and April, migratory birds join the residential birds and create spectacular bird-watching opportunities.

Chitwan National Park is located in the inner lowland plains of south-central Nepal. It is connected with Parsa, Nawalpur, Chitwan, and Makwanpur districts. The park lies in an altitude range of 100 m to 815 m in the Sivalik Hills. It is detached from the human settlement with the kindness of Narayani and Rapti Rivers in the north and west. Likewise, it shares borders with Parsa National Park to the east and Valmiki National park to the south.

END_OF_DOCUMENT_TOKEN_TO_BE_REPLACED

Trip Itineraries are customizable according to your choice & the number of days you want to stay. Simply, Contact Us 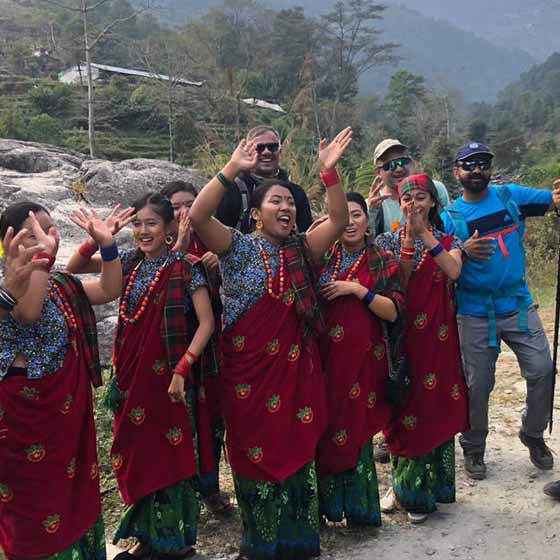 In November 2019, I came with my family for a 2-week city tour of Kathmandu, Pokhara, and Chitwan wildlife safari. It was great to see Mr. Ghanshyam after such a long time. In Kathmandu, we visit world heritage sites like Swyambhunath, Boudhanath, Pashupatinath Temple, and Bhaktapur Durbar Square, among others. Pokhra is the best place in Nepal to visit and even one of the most beautiful places in the world. Visit Devi's Fall, Phewa Lake, the World Peace Pagoda, Sarangkot, and a variety of adventure activities. The chitwan national park 4 days safari was mesmerizing experience ever.Overall, I would recommend Trekkers Paradise for everyone looking for a good value tour with flexible timings and experienced and knowledgeable guides. Thank you for your time and generosity, and I hope to see you again soon.

During monsoons (mid-June / July to October end) Jeep safaris are not conducted by park authorities. Alternate activities are provided during this period.

Book the dates for your next adventure

All our programs are just one example of what is possible. Trekkers’ Paradise, has experience in organizing tailor made tours for years. Therefore, contact us for your personal desire program!

Custom trip dates are available to go bespoke or private for which, Prices may vary*